The Sonic Blues, Rabid Dog: Thank you for playing along side us

Rory (Eindp Photography): For taking photographs for this and many, many local gigs

Juls Sampson (photography and pictures used for this blog): Our friend has shot many pics over the years

Kevin Byrne: for keeping an eye on the desk as we played

North Star staff: for keeping us fed and watered with a smile and allowing us to use the venue. 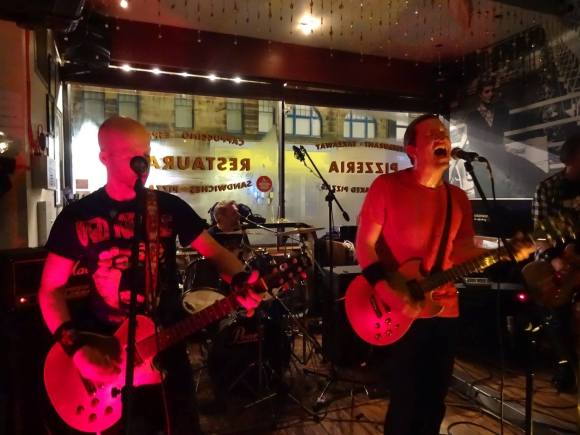 A couple of days before we were due to play, Clubby vocalist with Rabid Dog, texted to say that the North Star soundman couldn’t make the gig due to work commitments.

These things can’t be avoided but I was frustrated as I wanted to record the show. This would put a different spin on things. There were options, to use the house PA but I didn’t know its layout. To be honest it’s a vocal pa and it wouldn’t have been hard to use. Our pa had more versatility to send feeds to the multitrack so I opted for that.

It had (shamefully) been a couple of years since I operated it so that added to the stress. I had to relearn the desk within a couple of days. A few turbulent hours pushing buttons and moving faders I had managed to get to grips with the machine.

Looking back I understand now that doing the sound, recording the gig and playing at the same show is perhaps a step too far. This aside it was a great night.

Once I unloaded the vast amount of gear (probably too much) into the buzzing North Star I got to work setting up the sound, the time was half 6. Unbelievably it was now 8 o’clock and The Sonic Blues were due on in 30 minutes.

I ditched all ideas of checking mic placements for the recording. It was more important to get a decent live sound. That went fairly well, and for the recording I literally flung mics in front of the amps and the drum kit. 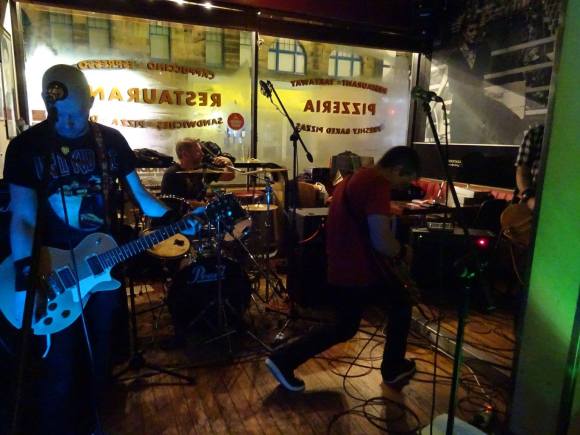 The Sonic Blues were up first and played another great set of bluesy rock songs and covers. Greg (guitars vocals) Allan (Bass) and Douglas (drums) are a sound bunch of lads and they are very keen. Their performance went well with the crowd and they set up the night in fine fashion

Clubby and the gang stepped up next; their ultra loyal fanbase was pleased to see them back on stage for the first time in a while. Andy had a cracking guitar sound, he has two amps hooked up and a wave of chords hit the eager audience. Andy on bass and Alan on the drums provide a solid backbone for Clubby to sing their set of punk covers. They played very well.

The gremlins came to visit us, it’s been a while, you can go many gigs without incident before the little creatures visit. Usually in the form of technical glitches and set up problems.

Just as we were getting ready to go on stage the power cut to both the PA and the desk. Scratching my head I looked back to the plug at the rear of the venue. Two chaps had seated themselves the unit in front of the socket and had unwittingly cut the power to the show. (not your fault gents)

Once I got the PA back on and the desk reloaded we were ready to play, only Stu couldn’t get the guitar amp on. (using someone else amp is fine but every guitarist will tell you having your own backline has its advantages). Once that problem was fixed we were ready.

To nail the opening track is essential; if you miss it it can unsettle you for the rest of the set. To a certain extent it did; although I have to concede I had been concentrating all night on the sound and with this loss of focus came a pretty standard performance from myself. So i’m a bit gutted about that. Stu, Greg and Derek all played well and helped keep the gig on track

Things did improve. As the night wore on we regained our composure (and confidence) and belted out tunes from both the decibels albums. I was too eager to play Quoted and nearly skipped Curtain hits the Cast! Quoted was manic as usual, Wait was requested and that gelled well with Deliverance and by the time we hit Industry I was scraping the guitar off a nearby pillar without much regard for my instrument.

As we reached the end of the night we reached our zenith and I was pleased it had ended on a high. If we can’t nail the songs we give it all to the performance and personally it was the most exhausting I have delivered for a long time. Our friends requested While Lotta Rosie, who could we be to resist! A little rusty would be an understatement but we had a whole lotta fun playing it!

So as our song Quoted and the politicians it depicts often say lessons have been learned. If i’m playing, I just want to play. I’ve I’m doing the sound, i just want to do the sound. This was the first time I had manned a desk at a gig and I thoroughly enjoyed the experience perhaps this could be an avenue for the future.

All round it was a great hot loud sweaty night, with a little rawness and a whole lot of heart which is what music at its purest form should be.

[…] Weird Decibels/Rabid Dogs/ The Sonic Blues. Finally we got to play with Rabid Dogs at the North Star and it was a great night you can read about it in the link above. We’re hoping to hook up again in 2017, sound bunch of lads. […]

[…] 27th May we rock out with The Sonic Blues and Rabid Dogs at the North Star. This is the story […]