Eindp Photography capturing the scene, his work is used on this blog with his kind permission

Bootsie Blue, The Projection and Grim Morrison the artists!

Before I entered Behind the Wall to head upstairs into the Loft (the ale house for the older bairns) I had no idea who was playing tonight. The fact that event organiser Rikki Toner has made so much of an effort to continue his push to rebuild the local music scene has made me determined to go and support it.

Once I had paid at the door, pleased that my fiver would be going towards the bands I met up with the one and only Stewart McCairney, quickly followed by Greg McSorley. We reflected on our last gig (the week before at North Star) and planned our next assault on world music domination.

While we plotted to headline Glastonbury the soundcheck was one two-ing in the background preparing for the night ahead. Just before 9 the first band would adorn the stage.

The tall, confident singer/guitarist Aidan Buhrmann of Falkirk’s Bootsie Blue held things together well and was clearly happy to be upon the loft stage. Dressed in black jeans, that looked welded on, the big chap strutted about the stage. Their drummer, Ian Simpson was manic. This guy truly delivered stunning beats hammering the poor drum kit to within an inch of new skins. You could see he felt every beat, superb. The bass player Callum Barret  balanced things by being subtly calm and focused on keeping the Bootsie’s sound tight. 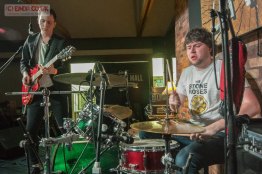 There were great songs unfortunately I don’t know the titles but ‘Bad Apples’ was a highlight. The first half of these guys set was probably the best I’ve heard in the local setting for a long time. The songs were dynamic and well structured. Once they flesh out their set I’d be surprised if they don’t make some sort of impression on the Scottish scene and are one of Falkirk’s most promising bands. (lets hope the scene grows with them)

As the night wore on I sampled more Tryst Carronade and blether to both Stu and Greg about the local scene we were thoroughly enjoying supporting other bands. For a while we, like many other people, stayed away from Falkirk bemoaning the lack of live music in our town. Yet we failed to realise that staying away contributes to the problem.

Up next was Glasgow band The Projection. Now I can be dumb at times so when I explained to Greg and Stu that I was looking forward to a visual spectacle by the projection I was ridiculed. (in my defence many bands use projection, most recently at Shuffle Down, when Paddy Steer was performing)

No offence but these guys are ‘experienced’ and it’s great to see Rikki had booked a diverse set of acts. These guys, bar James Lee Brodie on the guitar, are older and still belting out the tunes.

Stewart Cuthill was shielding his eyes looking for the crowd and eventually he left the stage to dance with the audience. They had a punk ethic with good melodic licks and Stewart had donned a nice ‘London, Rome, Paris, Falkirk’ tee shirt. Its great to see our fine town in the same light as these cities!  At one point he explained that there “should be thousands of people here” before launching into No Fracking in Falkirk. Which had the biggest crowd response.

The headline act, also hailing from Glasgow, were Grim Morrison a three piece who borrowed the excellent Ian Simpson from Bootsie Blues to play drums. They grooved well and I thoroughly enjoyed their set. James McManus on guitar and vocals gave it his all and he looked like he enjoyed it, Meg Kenny on bass donned with a floppy hat danced away as she skillfully handled bass duties. 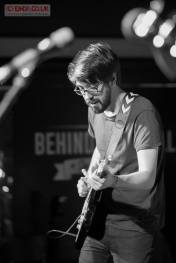 By end of the night I was tipsy; full of Carronade ale and ready to get the train home. There is no doubt that I enjoyed the night with good company and it was good to catch up with Falkirk music scene once again. Long may this continue. Please support it if you can.

One reply on “There are hidden treasures up in the loft”

[…] The Loft Sessions. Very enjoyable and it’s good to see that BTW have adapted the ale house to have more of a music venue feel, especially when they get rid of the benches. I really hope this continues and it gets busier. There were a couple of times it was busy and a couple when it was quiet. […]