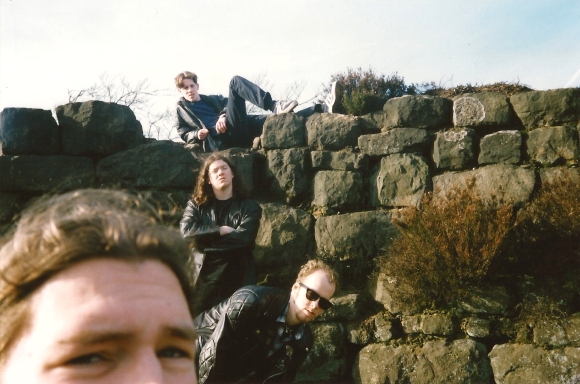 A story from the vaults. It was June 1996 and we had been offered a chance to play a festival in Fife.

After all the brilliant early gigs, the big crowds and the respect that we started to earn around the scene, it wouldn’t be long until we were brought back to earth with an almighty bump. We would play a gig that we would never forget, for all the wrong reasons.

Chris (late singer of Cage and longtime friend of the band) approached us under the blue neon haze of the Martell, we were all well on under the influence of cheap lager. He asked us if we fancied playing a festival, a biker’s rally in Crossgates, a small mining village just 2 miles from Dunfermline. This would be one of our first ventures out of Falkirk. A festival ( T in the Park was in its prime and we wanted to play a festival), a chance to play outdoors to an enthusiastic crowd of rockers, let’s face it, everyone who rides a motorbike likes heavy rock…right?

We didn’t enquire why Cage couldn’t do it but considering they had been asked to play the gig must’ve meant that it was a good setup. We agreed; Chris gave us the details of the organisers. It would be our tenth gig, the date was set, June 29th 1996.

Greg drove us across the Kincardine bridge, the day was fairly clear with sunny intervals, the trees full and green. We were in a jovial mood, Stu and Derek had a carry out and were keen to have a few beers before we played.

When we arrived, we bounced out the car, dressed in our checked shirts and ripped jeans, Stu in black, our long hair draped over our shoulders. The bikers turned to look at us, they stared for what seemed like an age, then lost interest. There was a mixture of leather clad bearded giants and weekend riders who on weekdays, we imagined, would be professionals that would spend Monday to Friday bored behind a desk trying to sell insurance. A short distance down the field stood, flapping in the early summer breeze, a white canopy tent. Within this, on some wooden pallets was the stage, to see this was rather deflating. There was a PA left idle. The speakers buzzing as we approached to set up. There was no sound engineer, no rack of lights or crowd barriers. Derek unpacked his kit and started to set up.

We plugged in our gear, Pabs tapped the mic to ensure it was working. Stu shredded some chords as Derek hit a roll on the drums. A diesel generator nosily rattled as it spilled out fumes just beyond the tent, this was our power source. Outside, under the occasional burst of sunlight, the bikers were indifferent as they started to play their drinking games. With a bottle of whiskey in one hand, a biker held a pole as another leather clad rider wheezily ran up to the pole, placed his forehead onto the shaft and ran around in numerous circles before being egged on by his brethren to drink from the whiskey bottle. As the red-faced biker swigged the spirit the crowd roared in approval. Back in the tent we played a song then waited for the bikers to swagger into the arena. Still we waited. A young mother carrying her child, stepped under the canopy and took a seat at the back, this was to be our audience.

We started to play our growing collection of songs, the generator in the background roaring over our guitars. The lady bounced her child to the music. After our first song we thanked her and tried to entice the crowd into the tent, it was not to be. Goaded by their peers the drinking games continued, roars and laughter spilled in from the field. We were the background music. Stu shouted, ‘any requests?’, a drunken biker hollered ‘aye get off the stage yer f*cking shite’

By the time we had finished the set a couple of curious peeks into the tent was about the best we could muster from the crowd. We had played our own songs, perhaps flung in a cover but it made little difference. We stepped off the stage and back into the field. We avoided the cow pats and stares of the inebriated crew. Stu and Derek had somehow acquired onion rings crisps and were merrily drinking cheap lager under the late afternoon sun, after this a drunken Derek and a sober Greg piled into a transit van with some of the bikers to get a chippy. Pabs, alone in the field was keen to go home, an alien in this unknown world. To make things worse for the brooding singer, Derek had left his kit up on the stage which another band had started to use so we had to wait until they had finished. To compound his misery the bikers piled into the tent to listen to the band.

We remember this gig to this day; we laugh at it now. Chris probably had a grin on his face when we accepted the gig, a wee chuckle knowing what we were getting into.