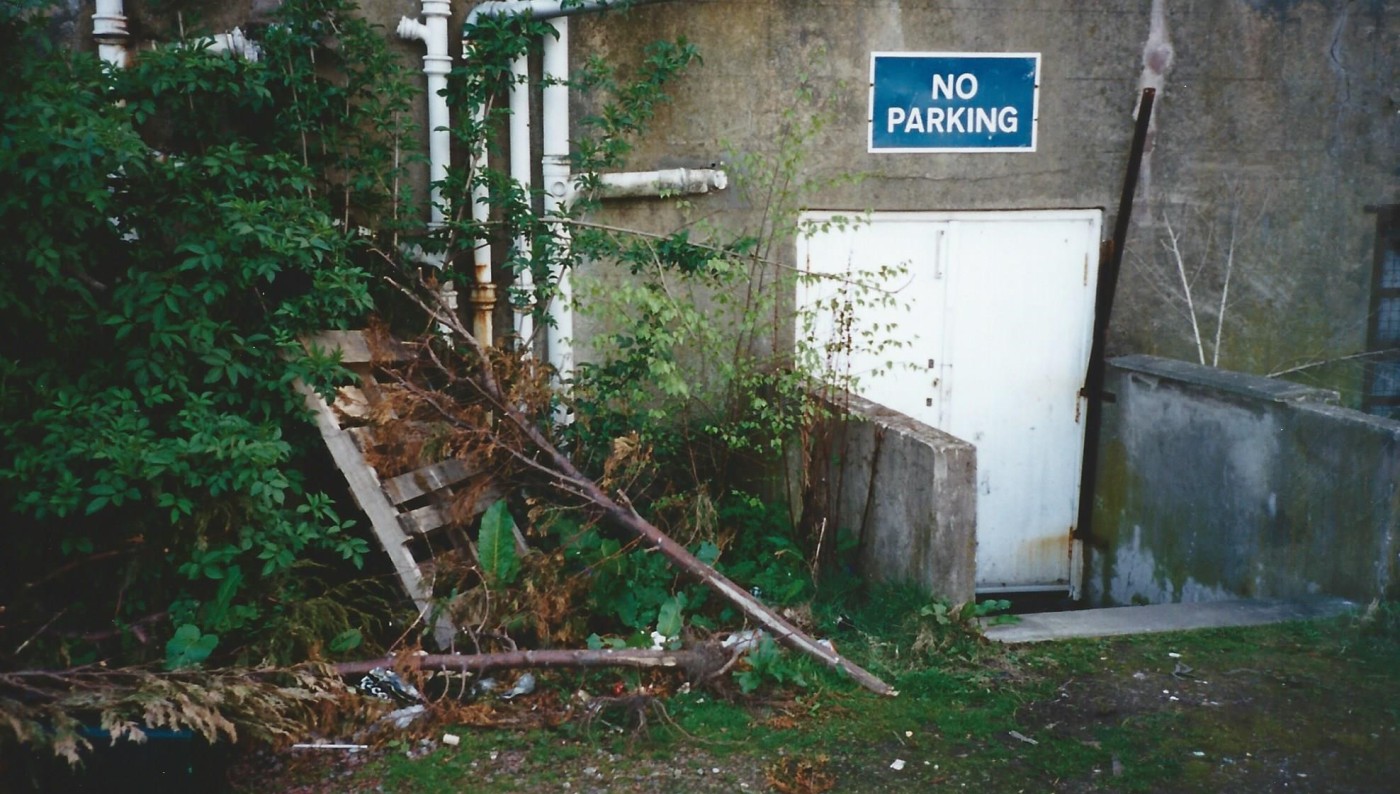 The Speak music video shot in the practise room

Link to three live performances in our practise space 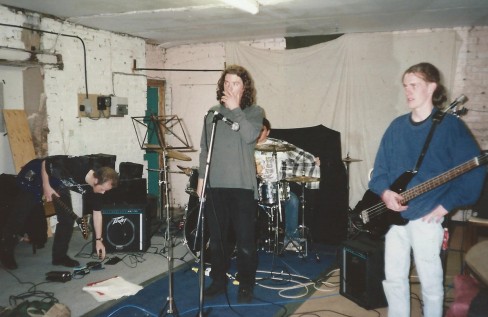 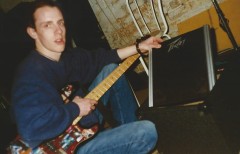 Greg tries to fix things and often it works 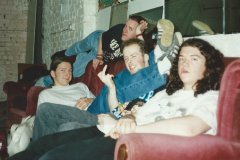 Sofa Guys. The great early days of the band. The time we wrote all of Whapper Stormer

Greg and I had just put the finishing touches to our new, as yet, unnamed band and we needed a place to play loud. I phoned the number printed and was met with a friendly chap who spoke in a low smoky husk. He explained that the room was near Grangemouth docks, a basement round the back of the bingo hall next to some wasteland. He added we’d be able to play as loud as we wanted. I booked a slot. It was to be a Wednesday night.

February 8th approached and we had bagged a lift off my Dad. Here was four young lads without much in the way of gear and band experience nervously wondering what was to happen next. I jumped out of the car in excitement to collect the keys. I frantically knocked on the door of the address that I was to pick up the keys. In the winter darkness the door creaked open and an elderly man, clearly dragged from his bed, mumbled that I was at the wrong door.

Later we finally found the dude he explained, under a haze of green smoke, the rules. We agreed a time for him to close the room and all was good. He dropped the keys into my hand and I raced back to the idling fiat Uno my Dad drove at the time.

After a great practise and three new songs we heard Greg’s dad Arthur pull up outside. He had kindly offered to take us all home. The hour came for the dude to meet us however there was noone to be seen. 15 minutes later Arthur was no longer waiting and we were to get going. We had to leave the room and all the gear unlocked.

The next week I nervously phoned the dude and for some strange reason he explained the location and rules of the room as if I had never used it and we had spoken for the first time. Then he explained that some arseholes booked last week left the room unlocked. He was so stoned that night he forgot we were even there. Had he remembered that fact we wouldn’t still be in that very room today.

In 1995 Grangemouth was a different place. We were in a basement, above us were various business that have come and gone over the years. There was noone around in this slightly dodgy location it was just a mass of overgrown trees swaying in the breeze from the forth river. The sky was (and still is) often lit orange by the flares of the refinery.

The basement is the size of a fairly large living room with a smaller passageway that leads around the back. There was never a toilet, just a sink. Heating was supplied via a gas heater that we used to huddle around in the coldest nights. We’d pay towards the gas as well as the rent and it was Greg’s job to get it lit.

In the early days there were white washed brick walls that gave it a clean look. There was a couch to dive onto and mirrors to check that the rock poses were all good; it was bright and spacious and a cool place for young musicians to create music. There were a number of bands booked in the room at that time. 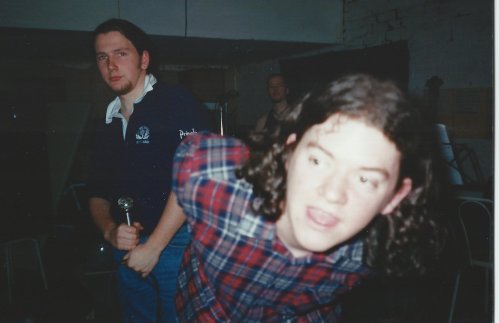 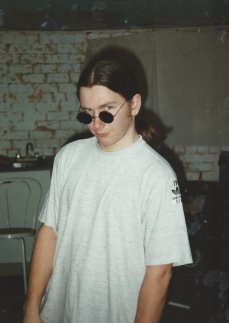 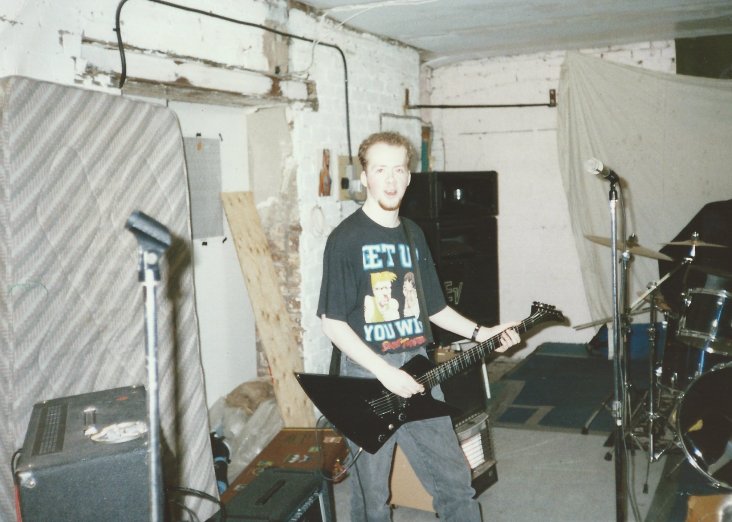 In the late 90’s we used to cross the road to Haddows to buy carry outs prior to practising. Greg was now a driver and the rest of us saw this as an excuse to drink a number of midweek beers. It got ridiculous, I used to take down a pint glass and sink a few calders creams. The three of us would be plastered and Greg would drive us home via the BP garage at Earls gate where we would buy food and Derek would take on any eating challenge presented to him. This included fitting a whole packet of cheese bites into his mouth.

The owners eventually ditched the room and we were forced to find a new rehearsal place which turned out to be in Bonnybridge. This lasted for a few months but as soon as we heard our old room was back up under new ownership we went start right back

Practise became a drunken stupor, we had lost focus and we stopped playing gigs so Wednesday nights were the only time we’d play music particularly around 1999 2000. The room was repainted by its new owners Frazer Law (Beany) and Russell Dickson in more a psychedelic palette and the drums were placed on a riser. We started taking a four track down and recorded a full album that would become Cold Home Street.

With the band stalling, Stu left for a few years and we became the Seventeenth. The room was now rented from a flower shop owner and we found the space was filling up with pots and flower beds (but sadly with no flowers). The room was split with a third used for storage for the florist. This was unfortunate as the place lost its feel for a while. However we still huddled around the same old gas fire in the heart of winter. 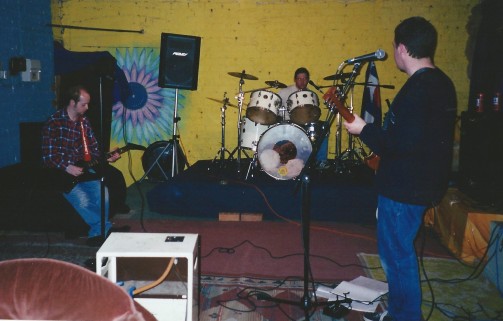 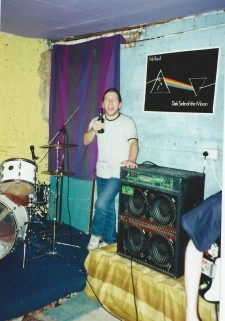 Derek has time for a beer

Time passed and in 2004 Weird reformed, the dividing wall fell much to our delight and the room was whole again however things were changing outside.

The bulldozers rolled in and swept aside the wild trees then an ASDA sign appeared. Our wee secret corner would soon be changed beyond recognition. A building merchant moved in upstairs and a fast food outlet next door to that. Then came the rats.

One cold wintry evening as Greg tried to start the gas fire I asked him to stop, the rest of the guys fell silent as I listened. Then from the pipes came the scurrying. The rats were here and getting bolder by the day. The room started to feel dirty and rundown. 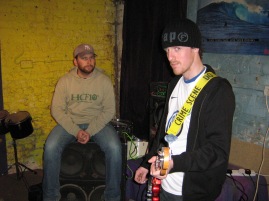 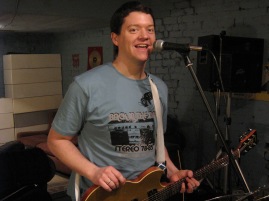 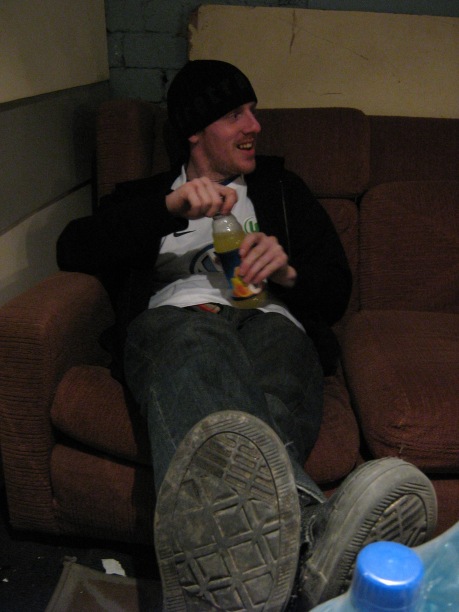 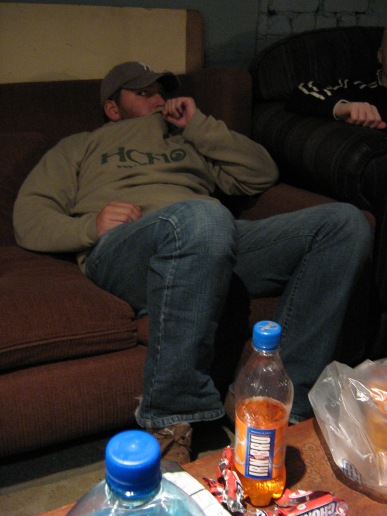 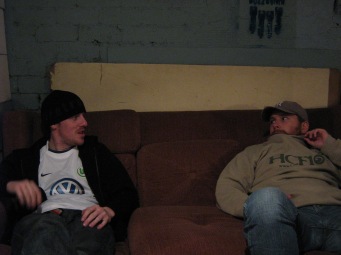 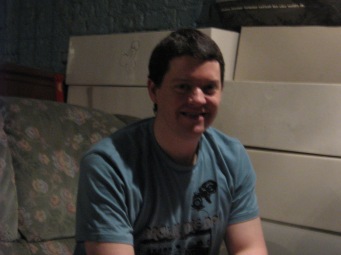 Thankfully the rats were dealt with and Beany made an almighty attempt to clean the room to its past glory, however he was scuppered by the strange appearance of couches. Several monolithic chairs started to appear and we were battling for space with the furniture. Some of it was Greg’s and he promised to get rid of it (tomorrow, promise). Then the couches got mouldy, still he promised to get rid of it (tomorrow, always tomorrow).  Months passed and the mould grew greater; my love for the room was wilting. Finally one Wednesday when i was expecting to open the door to its usual musk I was delighted to see the seats were gone. Once more the room was spacious albeit a little grubby. 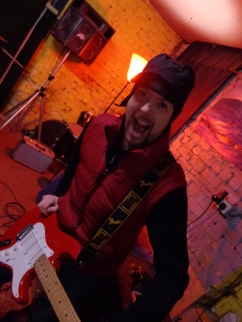 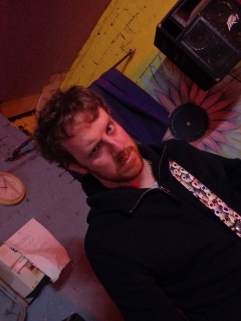 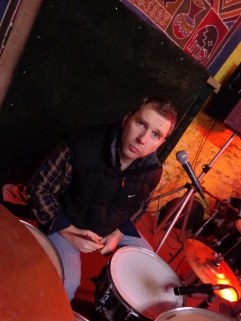 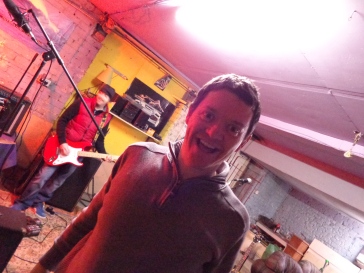 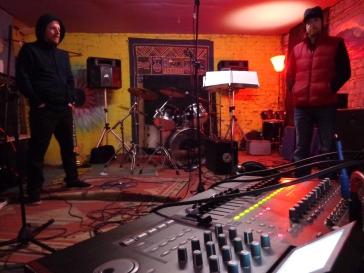 Today we still use the room most weeks and at occasionally we use it for recording. We do have to wait for the boy racers to drive out of the ASDA car park with their exhaust blaring. Haddows is gone, now it’s a sober trip to ASDA for water and sweets. Alcohol is gone, replaced by Tea and coffee supplied from flasks that I bring down during the winter months. A Chinese moves in upstairs every few months and one of the delivery drivers spends his life in his car with the engine running all night for some heat or to charge his phone as he attempts to combat the boredom of waiting for the next Chicken Chow Mein. 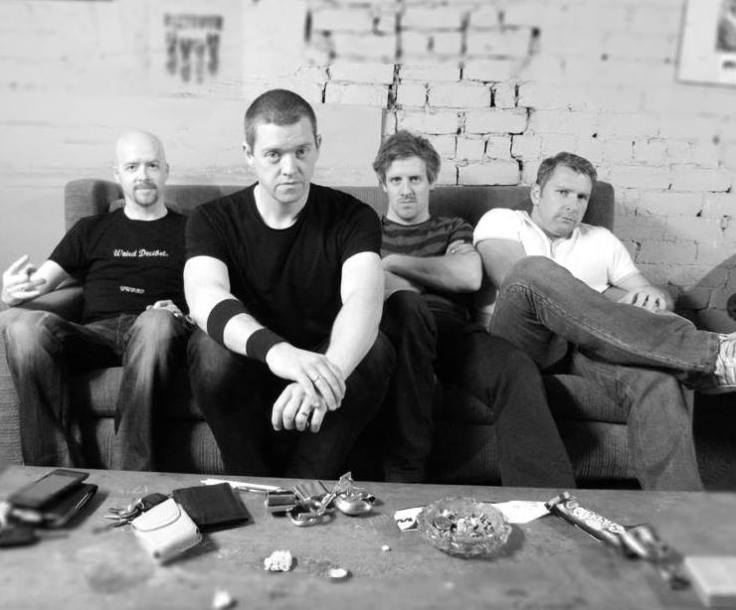 We’ve adapted. When we get bored of writing songs in the room we hire a cottage to refresh the creative minds however even to this day we are still inspired by our rehearsal space to create new songs. We’ve now used the practise room for 22 years. Recently we moved things around the room and the sound feels refreshed; when I strike the first chords on the guitar and look around the room at the other guys I can’t picture us being anywhere else. Fingers crossed we can stay a while longer as we’ve had many many happy times in that wee basement. We even shot a music video in the room and several songs. Check them out at the top of this post.

One thought on “Our Practise Room”