After the high of playing the Artisan Tap I was looking forward to seeing more bands on the Saturday as part of the excellent One Weekend in Falkirk. Now that I was returning as a listener I felt part of a festival. Both playing and listening to the acts has been a brilliant experience.

On the Saturday we were spoiled with Calum Baird, the Blue Lights, Fuzzy Star, Patersani and Grim Morrison.

Greg and I were keen to get to the Tap to see the first act Callum Baird, we had to drop some gear off at the practise room on the way to Falkirk. (the joys of being in a band, a gig can mean two days of work)

We arrived in time to catch most of his gig. Callum is a confident player who is keen to sing his message to the people who listen. He has a feel of folky blues and there is a brooding anger in his performance which gives him an edge over his singer songwriter peers. Callum thanked the crowd for listening. He politely explained that he had to head off to Linlithgow to play another gig. Here is an artist who plays non stop, hopefully the hard work will pay off.

As Callum Baird packed his guitar into his case to head out the venue a band that I have been impressed by, The Blue Lights, started to set up. Staying High is one of the best tracks I have heard from this scene in many a year. Unfortunately their drummer could not make the gig so they played a stripped back set. Kirsten Hamilton is a powerful vocalist, I preferred their original songs to the their covers. I got the impression that Kristen’s heart was in her own songs and I look forward to hearing the whole band live. 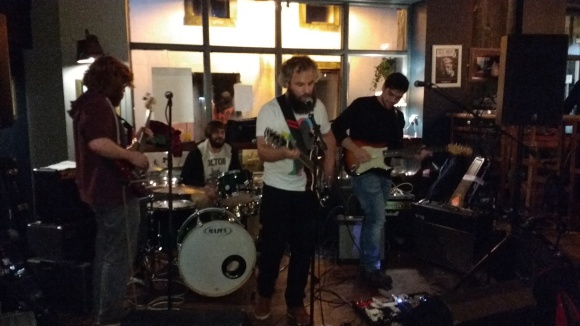 Fuzzystar, from Edinburgh, were amazing . Before they played I had went to the toilet (as you do) and this bearded man in a white tee shirt stumbled into the mens. I thought he looked rather unsteady on his feet as he looked for a cubicle, I smartened up and headed out to get ready for the next band. As I sipped on my Bitter and Twisted (now my favourite beer at the Tap) I couldn’t contain my surprise as the same fellow donned in beard and white tee shirt took up his guitar and proceed to lead Fuzzystar through a wonderful set of bittersweet melodies. Their clean guitar floated nicely then they would lace some distorted tones to change the mood. Their lead guitarist was superb, he provided focus for the band. One of the delights in exploring the live music on your doorstep is discovering bands like Fuzzystar.

After the bearded fellows departed the stage Patersani entered and these guys were slick and reminded me of a Scottish Kings of Leon (if there is such a thing). I was foot tapping to a nice blend of indie rock. Very enjoyable. 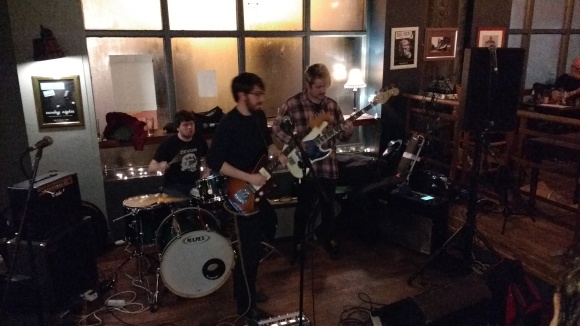 Last up was Grim Morrison, a band that I enjoyed at Behind the Wall as part of the Loft sessions last year. For various reasons unknown to me their regular drummer was absent so up stepped one of Falkirk’s best drummers Ian Simpson who is very adaptive and was able to stitch together Grim Morrisons sound. I’m not sure what has happened to their bass player, however the chap who was on the four strings handled his duties well. Lead singer James McManus blended into the crowd all night. He has a mop of jet black hair tinged with a streak of white. He does not stand out in a crowd however it is a different story when he steps onto the stage. While I’m not sure where his band is going he presents as an accomplished guitarist and vocalist. Again luck had departed him as a string broke (The worst thing that can happen to a musician) James had tried to string up this guitar but it wouldn’t play ball so he borrowed a semi acoustic from another musician and after this their set exploded. Whether it was frustration at the events that had unfolded James snarled and belted his way through the remainder of their songs and it was a superb recovery.

I finished the rest of my pint and headed out into the night to hastily catch the last train, it was at Falkirk High. The view from this station overlooks Falkirk. As I waited for the Edinburgh train I turned and looked over the town. In my drunken sway I had a smile for I knew that there is a chance we could have a music scene that we can call great again.

One reply on “Inverno (One Weekend In Falkirk Part 2)”

[…] next night, as One Weekend in Falkirk continued Greg and I went back to the Artisan Tap to see more live music. Callum Baird played a […]