Weird Decibels 1 has many good songs (in our humble opinion of course) but Wonder, Joker and Speak have always felt like singles. We had an idea for Wonder fairly early on so that video came first. Joker has had several ideas that we either too ambitious for a zero budget or the logistics of getting the right people together didn’t happen. It will though. Speak kinda hung around waiting for an idea. Derek rightly pointed out that we needed to get a new video out and he suggested our faithful practise room owned by the most understanding of landlords Fraser Law aka Beany. We get a free reign of the room so its been our home for nearly 20 years. Derek suggested we shoot a simple video there, and get it uploaded quick, however the idea started to develop.

The room is brilliantly ramshackle, it’s a homely basement with an underground feel. A perfect setting for an underground band shooting a budget film!

Influences and the ideas

The White Stripes, The Hardest Button to Button
A wonderful video.

After the drums intro Speak breaks into a guitar riff with individual notes. I remembered the White Stripes video The Hardest Button to Button, I thought some pictures on the video would be cool, a picture for each note. Below is a still from that wonderful video.

It worked really well, firstly with the guitar picks, then leads and pedals. Look for the picture of Pabs turning up his amp after Stu. That NEVER happens. 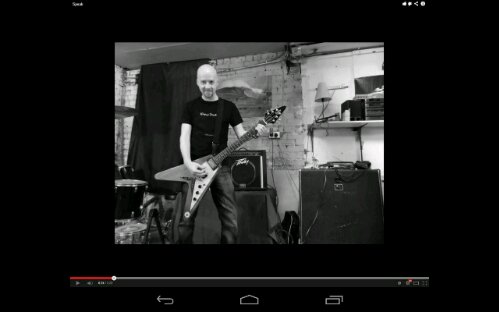 Pic above. One of the many stills used for each note of Pabs guitar riff.

For the verses we decided to mix things up, Stu singing, Derek on lead guitar, Greg on drums and myself (Pabs) on bass. For those who know the band there would’ve been a few head scratching moments for those that didn’t, well everything would be normal until the chorus. Myself back on vocals, Stu on lead, Greg on bass and Derek on drums. A simple goofy idea. 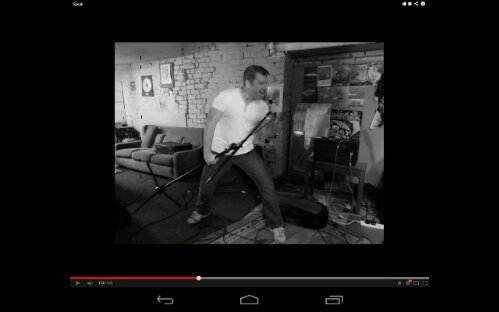 Nirvana is in everything we do

Yep straight from the Smells Like Teen Spirit vault. The middle 8 sees me screaming into the camera Kurt Cobain style, another mod to our musical youth.

The second verse was a complete surprise for the band. Greg took the outtakes and inserted them into film. Inspired. It gives the video a human edge and is rather funny when Greg fails in his drum stick whirl.

The solo is a classic Stu gig pose that we finally have on film. Stu and I stopped short of doing the back to back pose normally pulled at gigs. I had my moment now it was the turn of the guitar hero.

For the ending we returned to the still pics for every note. This time we had the band sitting on the old practise room couch. It was a nod to the back cover of Whapper Stormer, our first album. We had no one to take a band pic so we took a photo of the couch then using Photoshop we placed the band into the picture. This idea worked well for the end of the video.

How We Shot The Video

We simply used HD camcorders and Derek’s posh camera. The moving scenes were simple to shoot. The photographs were more challenging as we did not want the light to change too much, so we grabbed some sheets and covered the lights until Derek was happy, and continued to hold the until our arms ached with lactic acid.

The pic above sees Stu goofing around, the shadow on the right is one of the covers slipping down. No expense spared!

We shot the video in black and white to go with the same colour theme of the album, however Joker, the next video may get the full colour treatment. Who knows!

We thought this would be so easy to edit and upload but it turned out to be a nightmare in comparison to Wonder. The high def photographs sapped the RAM out of Greg’s poor old PC. Some more RAM a new video editing package and a new OS later and Greg’s hard work paid off.

So far so good! For a small band with around 30 hardcore followers its great knowing that hundreds of people are watching our videos. It is a new audience for us and we are reaching new corners of the globe. So thanks for watching!

The Speak video in all its glory.