Buzzards of Babylons debut does not disappoint. Stream here

In the 23 years that we’ve played around Scotland we have met many great bands and friends. Time often sees many bands fade as we carry on towards out next musical adventure. There is an exception; the wonderful Buzzards of Babylon.

It was around our One More Solo tour back in 2005 that we first met some of the Buzzards. Back then they were in a different guise, Kranksolo, this is where we met current BoB members Rab Dempsey (vocals) and Mike Gordon (bass). We had played the Path Tavern, a small venue in Kirkcaldy.

The Buzzards of Balyon arose from the unfortunate end of Kranksolo and released a fantastic EP; this included Monkey Knife Fight which became a solid live favourite.

Probably one of the best album names of the year is Micrometeoriod Modulation. Rab, Stuart Gillies (guitar), Mike, Stephen Kirk MacLeod (drums) and Alec have produced a thumping 48 minutes of rock, blues and a tinge of metal brought together by their long served sound engineer Travis Whalley.

Opener I Am Hell has a growl, Rabs vocals are always strong, he has a voice and range perfectly suited to the downtuned rock that plays with him. The huge riffs have a blend of Queens of The Stone Age but meater, perhaps in the vein of mid-early Metallica.

The guitars drive the music, with the kind nature but imposing stature of Alec Raeside and Stuart Gillies assaulting both speakers.

The guys are having fun, embracing their superb music that so far remains unsigned, is being unsigned such a problem anymore? The title of the tracks give away some of the enjoyment they are having B U aWzrd being an example. Its quick riffs show the dexterity of the band before they launch into meaty chorus chords. 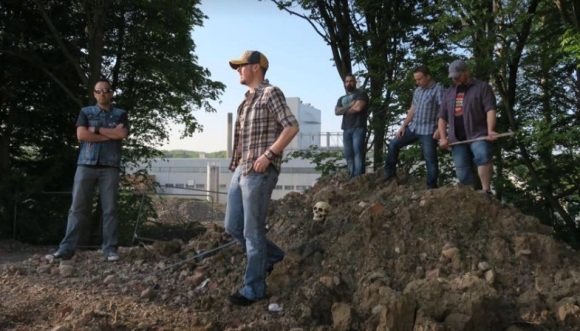 Rabs lyrics have always been well written; ‘Be you a wizard or a Mother of invention’ he roars as the band changes pace throughout the track. The beauty of B U aWzrd is the many magical roads it takes you down.

This is what people miss when they only listen to bands from the mainstream, they miss bands who are prepared to take risks, push their music in a different way, bands that are happy to play songs over 3 minutes long. At over 7 minutes this is spellbinding.

Morning After is next, subtle guitars gently bring in the song, giving the record a chance to breath and cleanse the palette before the crunch kicks back in. I thought Mark Lanegan was singing for a minute, Rabs fantastic controlled vocals showing his lower range; arguably this is where he thrives.

When Rab snarls ‘I lost my way, I lift my head towards the sun’ near the end of Interplanetary Convulsion you can feel aggression resonating from the usually upbeat Mr Dempsey, it’s a fine track that slows down with the mood as it fades.

Bi-Polar Bear is blues at its heaviest, this is confirmed when the mouth organ floats over the monolithic guitars, it’s a nice change of texture for the record. I’m tempted to say that this is a direction that suits the Buzzards, the moody blues really fits with the pitch of the vocals. Perhaps a highlight of the album.

Buzzards Of Babylon are a fine band; we’ve played a few shows with them and love it. Everytime we met its never like strangers. They can drink…only our Greg has matched them.

They have finally graced us with an album and it is  worthy of a purchase. Sure you could accuse us of being bias towards our friends but those that know me say I won’t say music is great without meaning it. Its excellent and satisfyingly aggressive enough to have you nodding your head in approval.  Buy it, support one of the unearthed gems of the Scottish music scene, the Buzzards are soaring upwards.